After almost two decades in a wheelchair, you might think I have seen and done almost everything possible in the disabled sports world. That’s what I thought, too, before being selected to join the Navy and Coast Guard at the inaugural Warrior Games held for a week in mid-May at the US Olympic Training Center in . It was an INCREDIBLE event.

The two main reasons I chose to attend were to connect with other disabled athletes from every branch of the military and compete wearing the Navy gold and blue. While there were others, these were the biggies.

Here’s a quick explanation and summary of the adventure —

Because I was injured so soon into my active duty career, I never felt that I had the chance to develop the camaraderie that comes with serving our country. Since I never fought in battle (or against the other branches of service) while on active duty, I have long felt the urge to represent the Navy in any sort of competition.

Oh, and one more thing. Shortly after arriving, I found out that I have been injured the longest of any active duty or retired Navy athlete on the inaugural . I wasn’t the oldest, just the oldest injured. No problem though…my energy and enthusiasm was still surprisingly Navy strong.

I’d be lying if I didn’t say one of the reasons I applied was to take advantage of the opportunity to spend week as an athlete at the OTC where I would live, train, eat and rub elbows with current and future Olympians and Paralympians. Yes, I have been there twice before (both for USA Wheelchair Rugby tryouts and camps) but both times I was basically scared to death of being cut and therefore worked my ass off wearing rugby blinders the entire time. OK, so maybe on one visit I did take advantage of the free haircuts offered to athletes by Super Cuts, an old sponsor, but I didn’t go overboard and live large.

My experience living at the OTC was incredible. I got to know a few resident athletes on both the men and women’s wrestling teams, met a few gravity defying gymnasts (can you believe I never knew the floor exercises are on a super springy “floor” and that’s why they bounce so high) and had some great conversations with the Type A, training obsessed triathletes. (Yes, I’ll admit I’m partial to those who choose to sweat and suffer in the water, on the bike and on the run.)

Once I was settled and unpacked, my attention shifted to meeting those who are serving (and who served). What really caught my attention were the athletes themselves (with all due respect to the support staff). I have always believed in the healing and rehabilitative powers of sport but what I was not prepared to experience were the severity and variety of injuries I encountered. Living in the dorms alongside nearly 100 other athletes – all with injuries that limit or restrict participation in sport – gave me the opportunity to learn about the perils of modern warfare. The proof? “IED,” was pretty much the universal answer to the “So, how did you get injured” question that we all asked each other throughout the week.

Soapbox — All the missing limbs, vision and hearing loss, TBI and burn scarring reminded me that war does not play favorites nor does advanced and huge military spending equate to total soldier safety. War has – and continues to be – a human interaction where casualty and fatality are commonplace. And no matter which side “wins” or “loses” the battle or war, we all bear the scars. My fellow athletes are living proof.

Anyway, back to the Games. Living at altitude (I think is at about 6,000’) and training/racing even higher (I heard the outdoor track at the is over 7,000’) was a pretty cool way to spend a week (even though my skin cracked and nose grew some amazing, well, I won’t go there).

As for events, I competed in 2 track events and even gave wheelchair basketball a go.

Logistics? There were a few glitches along the way (you gotta remember it was partially organized by the military) but in the end, I will remember it as one of my most significant and memorable experiences in both sport and life. I was proud to wear the Navy colors again and carrying credentials with the Olympic rings on it around my neck was sweet! Yes, I am a Navy man, a teammate, a veteran and an American.

I left the Warrior Games with a bronze medal, new energy to be the best I can be in everything I do and a renewed sense of pride in being a Navy man and a veteran. (I must say that after being out of – and away from – the Navy for so long, my pride and sense of belonging had diminished a bit.)

For your viewing pleasure, here are a few photos I snapped with the camera phone throughout the week. For those of you who have never made the trip, the Colorado Springs OTC is a pretty sweet place. When the sky is blue, the view of is amazing. The athlete center (readily accessible and full of free , lounging to the max, a kick-ass library of athlete focused books, DVD’s and plenty of inspirational quotes on the walls) and dining hall (imagine a cruise ship only healthier) is top notch. And while the resident athletes live in some pretty sweet condos (I remember Rulon Gardner and Anton Ohno letting a few of us rugby guys check out their stylish wrestling and short track speed skating pads a few years ago), the visiting athlete set up camp in the old, military style, cinder block dorms (complete with fraternity house styled bathrooms with not-so-private toilets and shower stalls). They *ahem* bring back memories of college life. On a positive note, I was totally psyched to see that in-room cable TV’s have been hung since my last visit in 2003 (but I think the sheets, mattresses, pillows and towels are still the same…ha ha…it’s about SPORT not LUXURY, right?)

What an amazing opportunity I had to serve again. New friends, good fun, competition, awesome memories and a renewed sense of pride. Go Navy! 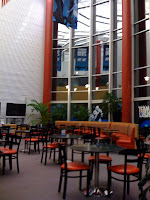 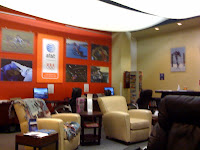 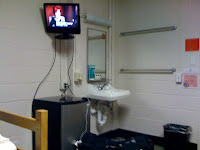 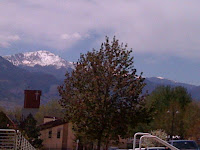 The view of Pike’s Peak is amazing! 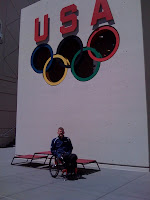 Not complete without the Olympic Rings!