I’ve always wondered what happens to the photos that random people take of racers during events like the Boston Marathon. It’s fair to say the girls of Wellesley take shots of the guy runners with their shirts off (cue the image Lance Armstrong and Matthew McConaughey running on the beach sans shirts or the Matt Damon parody of McConaughey – “why don’t y’all come down to Texas, where I’m from, 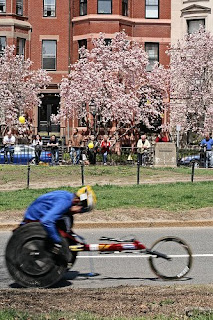 and we can take our shirts off and pick up chicks) to share with each other. The drunken BC guys take shots of the female runners who aren’t puking as they pass through Cleveland Circle to prove that women can be attractive even when they aren’t throwing up. And every now and then someone jumps out and takes a shot of me. Why? Who knows. But here’s proof.

In the old days of film, I envisioned these folks leaving the Marathon and heading straight out to develop their rolls of memories. One day later (yes, I’m going w-a-y back in time), they pick up their film at Fotomat and flip through their stack saying “good, good, good, nice shot of ole’ Uncle Willie sleeping, good, good, who the heck is this…” and toss my mug straight into the trash.

Images are easier to capture and share in the digital age as many a celeb, politician, athlete and “owned” college kid has unfortunately learned. Photos pop up everywhere for all to see. I guess I just joined the ranks. Horray, it seems I’m now just a click away!

I found this photo online and it spoke to me. And that is to say I focused on it even before I realized that the lightening fast subject blazing through the viewfinder was me. There are many layers to this — from the historic and chic Boston brownstones with blossoms popping in the background to the fact that my image is blurry which is proof enough for me that I actually was m-o-v-i-n-g at some point of the race. There are signs of positive energy, forward motion and determination. I see signs of rebirth. I see love and support. To me, the photo is almost a personal, visual reward for a winter of training and racing in not-so-great conditions. Fantastic!

So, thanks “apdonovan” for the great shot. Who ever you are. And if you happen to read this, nice photos of the Dropkick Murphy’s on Flickr, too. How’d ya get so close?