Questionable Behavior (or How to be Frei Fast) 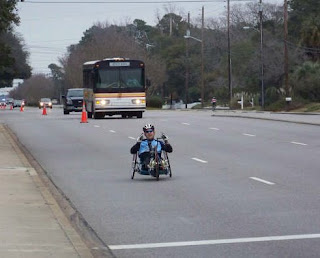 Last weekend I engaged in what some traditional wheelchair sports aficionados might consider to be questionable behavior. I won’t mislead you or try to sugarcoat my actions at all…I lined up at the start of a marathon not in a racing wheelchair but in a handcycle. Call it a hand bike, arm cycle, handbiken or three wheeled racing thingy with a chain and gears (the official category at this marathon was “crankchair”) but I knew I had a mechanical advantage I wasn’t used to having in a marathon. You get the picture…I had gears and the runners and wheelers did not. Was my behavior controversial?

Let’s go back to the o-l-d days and set the scene. Before the turn of the twenty-first century, when wheelchair sports had that historical feel more closely associated with steel and titanium than carbon fiber and aluminum, athletic innovators decided to put gears on a racing chair. Or maybe they decided to lower the seat of a traditional bike frame and add a third wheel for stability. Or maybe they decided it would be fun to pedal a bike with your hands and simply flipped the cranks. It’s hard to say how handcycling was born but no matter what faith we adopt, or what belief we accept, we all must agree that this new sport had energy. And it quickly caught on within the ranks of the disabled because we are athletes, too.

Controversy soon followed. Was this unknown, three wheeled vehicle with gears the same as the one that had simple push rims? Were they the same and did they use the same muscle groups to create forward motion? Where should these vehicles be permitted to compete? Should they be permitted to compete alongside each other or were they entirely different? Did the gears give an unfair advantage? The debate raged on and on…there seemed to be no easy answer.

Unlike the genesis of the Ironman, where an alcohol fueled controversy in a tropical paradise between swimmers, runners and cyclists led to a new sport that included the three existing disciplines (read: “Pass me the pitcher, dude…who is the fittest athlete?”), this controversy was built on the argument “are these new handcycles and racing wheelchairs the same or different?”

It got nasty. Courts stepped in. Lawyers made money. Marathons made decisions (and got sued if their choice offended one certain group or the other). Governing bodies were challenged. The UCI, USATF and IPC made rulings. Some athletes took sides and got vocal.

As a multi sport athlete who simply loves to compete, I planted my butt in a handcycle in the 1990’s as fast as I could while also continuing to race. I found that gears made it easier to recreate with lower impact given my disability. Sitting in a handcycle (unlike in the racer) allowed me to see what was around me. And low and behold, I learned that I was able to cover greater distances with my crankchair than I was with my racer.

There was no controversy in my book. I equated handcycling to biking and wheelchair racing to running. I came to my conclusion after enduring sweaty miles, sore muscles, blisters, aches and pains in both the hand bike and the racer. I now had two loves.

So what’s happening these days? In the last few years, some running races – big and small – have chosen to include both handcycles and racing wheelchairs in their numbers. They correctly recognize them in two different divisions. Certain major marathons give awards to both while others recognize only the wheelchair racers as legit. There is no standard or accepted practice. Such is life. Argue if you want.

After eighteen years of competing at a high level in both sports, with over 60 traditional wheelchair marathons (including 16 Boston Marathons), as well as a nearly equal number of handcycling races (including a criterium national championship) to my credit, I thought, “What the heck, I’ll give in to the Dark Side and see what happens.” (Truth be told, I wasn’t in racing wheelchair shape yet but still wanted to compete and knew my crankchair wouldn’t leave me injured and battered.) I did it just for fun. I wanted to get out there, work up a sweat and fuel my competitive spirit while also enjoying a little vacation.

But before I registered as a “crankchair” athlete for last weekend’s 26.2 mile journey, I thought about another athlete who I have respected for years. I wondered what he might do given the same choice…WWHFD? (What would Heinz Frei do?) You see, this Swiss legend has won the Boston Marathon twice and is also the reigning handcycle HCB Road Race Gold Medalist from the Beijing Paralympics. He does both sports and he does them well. World class well! Frei has been the best in the world for years and made his own decision about handcycles versus racing chairs a long time ago. My decision became quite clear when I looked at Frei’s resume. Heinz would enter the race and if he believes in the benefits of doing both, so should I. South African, Ernst Van Dyk, would do the same thing…he’s a pretty crazy athlete, too.

What did I learn after cranking over the finish line? I remain committed to my longstanding belief that crankchairing and rollstuhling are two distinct sports that don’t belong in the same division or on the same field, track or road. Heck, there isn’t even common nomenclature for the sports. But if the opportunity is there, and you have a choice, why not give it a shot?

So please don’t construe my behavior as questionable. I was lucky last weekend to have had the choice. And now, thanks to my decision to step outside the bounds of tradition, I know what it means to be “Frei Fast” as both a wheeler and as a cranker in my own little world.