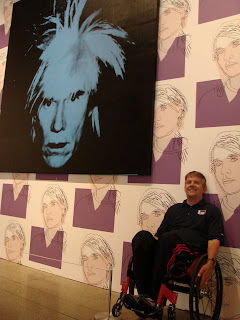 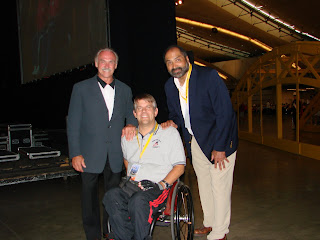 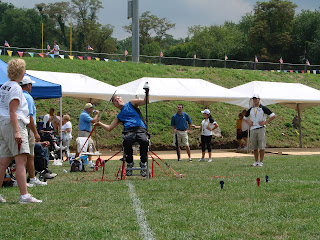 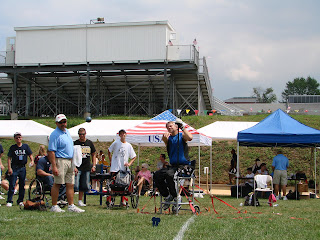 I’m a bit late in sharing these photos (I’ll admit it, I totally forgot they were even on the camera’s memory stick) so please turn your calendars back to early August. The National Veterans Wheelchair Games made its 2011 stop in Pittsburgh and here’s a riddle. What does a racer who is resting his overused shoulder do to keep busy and, oh yeah, compete? The answers (as depicted in the photos above) are as follows:

I also played table tennis and tried my “Minnesota Fats hand” at 9-ball. What do I have to show for the efforts? Great memories, new experiences, 3 bronze medals and 1 gold in…wait for it…keep waiting…now sit down for it…9-ball. Actually, to be honest, I got my ass handed to me in the Class 1B Gold Medal 9-Ball Match by a British dude who, I think, lives for the sport and a-r-r-i-v-e-d already covered in chalk (I’m guessing he spent the morning practicing on a super top secret, hidden table), but since the Veterans Games, being internationally friendly, awards double golds whenever an American and either a Brit or Puerto Rican vet compete against each other, we both came away with gold. I certainly missed competing on the track but a healthy shoulder and staying away from the sweaty endurance stuff was more important.

We will see what happens in the next months as the 2012 Games in Richmond, VA, draw closer. Who knows, maybe I’ll revisit my Veterans Games nemesis…the slalom. Or maybe not.