Home>Family >I’m On A Bridge…
30 November In Family, Miltary/Veterans, Spinal Cord Injury, Sport, Think About This, Travels and Adventures by Mike Savicki 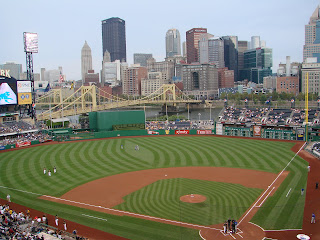 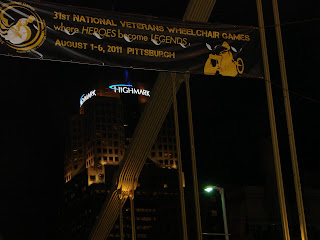 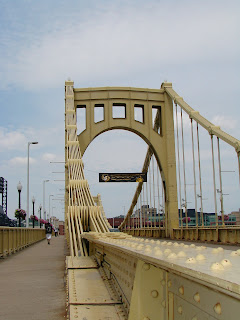 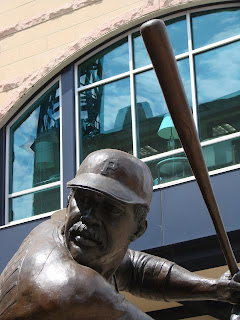 Speaking of my almost forgotten and overlooked trip to Pittsburgh for the National Veterans Wheelchair Games this summer, I remembered one more cool thing I wanted to share. OK, two.

Look off in the distance in the baseball stadium picture above. See the yellow bridge? No, not that one, the closer one. That’s the Roberto Clemente Bridge named after an awesomely pioneering Pittsburgh Pirate baseballer. Google him if you forgot who he is. Anyway, there was a Veterans Games banner spanning the entire width of the bridge (see photos two and three). Long story short, I was rolling under it one evening on the way home from watching the Pirates lose and I noticed the dude in the racing wheelchair on the banner looked familiar. Yep, it is yours truly. I guess when you roll enough laps on the track over the years, a VA cameraman is bound to capture you. What an honor!

Ok, and here’s the second cool thing. Outside PNC Park there are a few amazing larger-than-life statues. I focused my lens on a certain one (see photo number four). Remember Willie Stargell? Pops? He played his entire 21 year career with the Pirates including the years when I was a kid learning about baseball. He even won two World Series with Pittsburgh and was an MVP. (Don’t hate me Boston, the Pirates are NL.) What I’ll always remember about watching Pittsburgh were their cool hats and the “Stargell Stars” Pops awarded to teammates when they did something awesome. I bought a Pirates hat and colored the whole thing in with gold stars just so I could be like him. Willie was a leader in the truest sense. He was an unselfish player who put his teammates first. No wonder he is a Hall of Famer. That mustache rocks, too.

I was on a bridge and Stargell still rules Pittsburgh.