Top things overheard during the race this year…

Enjoy these three photos from this year’s race. Sarah took the first two as I rolled through center while she and my parents cheered loudly. The third was shot by a photographer named Scott Zakrajsek who published it on Boston.com (thanks for the free publicity, dude) as I rolled through

near the finish. I don’t look too bad for the miles if I do say so myself.

Here’s a funny story. Look closely at the side of my helmet in the third photo. See the purple flower sticker? Don’t laugh, I didn’t put it there. My lil’ niece, , gave it to me as a good luck sticker a couple days before the race. I think she sensed I was nervous. Flower power worked.

I had a really great race this year and am already looking forward to 2011. Please join me! 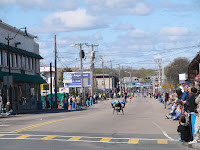 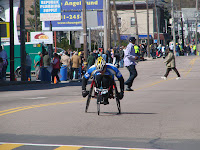