OK, here’s one for ya. Earlier this week, I was lucky enough to get selected to do a NASCAR PSA for PVA. Say that ten times fast. See what I mean? The Paralyzed Veterans of America (yes, you’ve heard of them and know how much they do for veterans like me in wheelchairs) was in town to shoot a public service announcement for a new campaign called “Mission: ABLE” (in a nutshell, it’s a partnership between PVA and NASCAR to help raise funds that will allow veterans to get better access to care, benefits and jobs) and they needed a veteran to participate in both the photo shoot as well as the video which will be televised during upcoming races. I happily agreed to participate.

The shoot took place at Dale, Jr’s Hammerhead studios in Mooresville and it was amazing. I managed to smile “purty” and not run over any toes, get caught in any cables or break anything (including cameras, lenses, etc.). The best part of the day was getting to meet (and laugh, hang, shoot hoops, joke and look good with) a bunch of Cup drivers as well as one . Yeah, that one. Here are a few of the non-official “behind the scenes” shots of moi with the various dudes. (No one needs to know we all are wearing make-up so I’ll keep that secret to myself.) 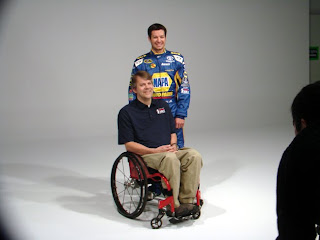 The first shots were with Marttin Truex, Jr., coincidentally one of the first NASCAR drivers I ever interviewed when I first started freelancing. We had a blast and were conscious about respecting the “bro code.” 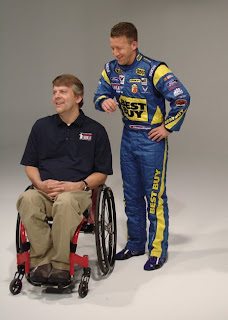 AJ Allmendinger rolled in next and as serious as he tried to be, it didn’t work. Proof is the photo above. AJ drives the famous Petty #43 car which is now sponsored by . FYI, is the top sponsor for an upcoming fundraising event called The King’s Cup, a go kart race plus concert, auction, etc., that raises money for PVA. It’ll be in Charlotte the week between the All Star race and the Coke 600…late May. 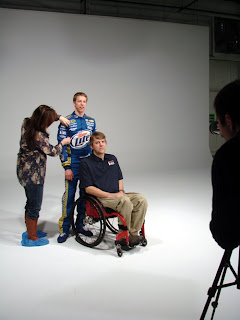 See the make-up lady in the photo of me with Brad Keselowski? Brad made her work her ass off and he didn’t even know it. Funny as a fart. Every time she got his fire suit adjusted and posed so the Mission: ABLE logo was front and center, he’d shift, move, stick his belly out, turn, put me in a headlock, stick his ass out and/or go in to some sort of crazy dance and the lady had to come out and pose him all over again. This dude is a scream! No wonder he’s such a great driver, he’s always on (unless, of course, he’s napping which he says he does often). Funny story, I was making fun of him for struggling through a little bit of in-between-scene basketball (he says he was restricted in motion by his his fire suit) and I jokingly bet him he would not keep the suit on for the rest of the day while he did everything else on his schedule. We got into a great debate about “how would I know if he changed,” “not believing in the honor system,” “hiring someone to follow him,” “bribing that person to look the other way,” etc. We laughed our way through lunch and resolved nothing. When all was said and done, I think we agreed that if things went as we forecasted (I wouldn’t know if he changed or not), he would make one dollar from our bet and the lawyers that we would need to hire to oversee the bet would get rich. What a country. Anyway, when I got home, I checked out Brad’s web site. Turns out it says he loves to argue and if he weren’t a driver, guess what, he’d be a lawyer. Really? Go figure. BTW, Brad’s Tesla is sweet. And he drives it like a madman. Can’t blame him. If I has one then I would, too. 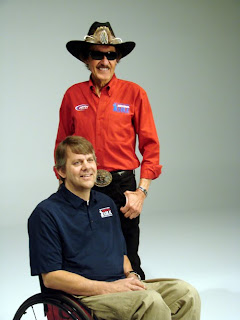 Here’s yours truly with The King. Glad he and I went near the end. He’s obviously at home in front of the camera and after 3 hours of smiling, sitting still and learning to follow directions, I was pretty comfortable, too.

One more thing. We didn’t get any shots of me in the video room (thank goodness) sitting in front of a shitload of bright lights and trying to read “Paralyzed Veterans of America’s Mission Able Campaign…” off a screen and look at the camera (which I still have no idea where it was) while all sorts of editing folks plus one director tried not to laugh at me. Total tongue . Alphabet freakin’ soup for the soul. I had to say like 20 things and each driver had to say, like, one thing. I was a nervous wreck and screwed up about 50 times in a row. “OK, try it a bit slower.” “OK, a bit faster this time.” “Try saying it like you are having a conversation.” “OK, how about just saying it like you are reading from the telescript.” “Good, I think we are done.” I now admire movie stars who are at home in front of the camera. Shit ain’t easy. Maybe I’ll get there some day. Or maybe I’ll see the finished product and crawl under a rock.

Either way, great day, great new friends and a great cause.