11-11-11 and the Cornelius Veterans Monument 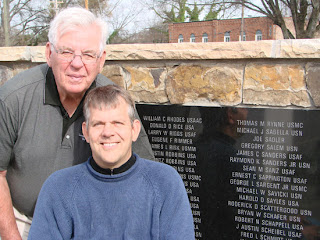 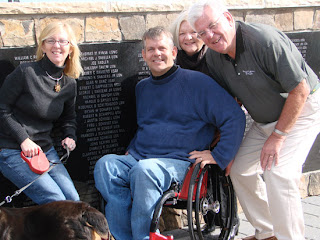 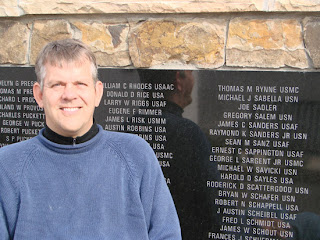 Shortly after 11 AM on Veteran’s Day – 11/11/11 – as the jet aircraft vapors from the military flyover still lined the sky overhead, the mayor of my small town stood and proudly made a proclamation. To the hundreds of gatherers, including veterans from wars and conflicts dating back nearly a century, our mayor dedicated my town’s veterans monument to the community. It was one of those “I remember when…” moments to be sure. Sitting amidst a collection of veterans old and young, I could not have been more proud.

The monument includes the names of more than 1,100 veterans, living or deceased, who have served in the U.S. Armed Forces, received an honorable discharge and live or have lived in Cornelius. The purpose of the veterans monument is for the Town of Cornelius to show its appreciation and to pay tribute to those who served, or are presently serving, our great nation in the defense of its freedoms. A 31/2-foot by 51/2-foot granite panel balances six white pillars. A stone podium and flagpole sit at the northern edge. It is a beautiful site.

A former mayor came up with the idea several years ago after an old veterans plaque was lost during the construction and relocation of the town hall. When he approached town administrators to upgrade the replacement to something that might stand in perpetuity, they agreed to contribute $50,000 if the community could raise the remainder. Citizens, town leaders and staff, business owners, police and fire fighters joined together in the fundraising efforts that spanned more than one year. Efforts included two poker runs, a gala, a charity softball game, a bar-b-que lunch, individual donations and more. Serious small town fundraising. Amazing community spirit. The effort got a significant boost when three area Rotaries joined together and donated the remaining $15,000. The final bill for the Cornelius Veterans Memorial Monument at Rotary Plaza was $186,000. Nice upgrade.

On that crisp and clear morning, I thought about what it means to have served. I remembered the day I raised my right hand and swore to defend the Constitution. I remember the weight of my commitment I felt the first time I was saluted as an officer. I remembered the exhilaration that pulsed through my veins after my first flight in a fighter jet. And I remembered how, after my spinal cord injury, I unwillingly became a member of a community I was not yet ready to enter.

Being a veteran is a privilege that I am now, 20 years later, just beginning to understand and appreciate. I didn’t fight in a war, soldiers alongside me did not die or lose limbs and I never felt the horrific terror that comes with staring down the barrel of an enemy rifle. I was never a prisoner of war and I don’t belong to one of those veteran organizations where you wear a certain medal, colored blazer or pointed hat. Very seldom do I gather with other veterans and share war stories over a cup of coffee but I am a veteran nevertheless. I am proud one, too.

During the Thanksgiving holiday a few weeks ago, I took my wife, Sarah, and my parents, Bill and Helene, to visit the monument. Our dog, Carly, came, too. I was happy we all visited together. I know everyone appreciated it. My Dad is a Navy veteran and we shared a sense of pride. Sarah and my Mom found my name immediately. And I think Carly had fun, too, even though she appeared to be more interested in barking at the motorcycles that drove through downtown.

Here are a few photos from our visit.

The monument is worth a visit. If you happen to be driving up or down I-77 just north of Charlotte, head east off exit 28 and continue straight about 2 miles. The Cornelius Veterans Memorial Monument at Rotary Plaza will be on your left just as the road ends. Pull off and park behind the town hall. Give yourself a few minutes and stretch your legs. I might be there thinking, writing or reflecting. Today is the 70th remembrance of Pearl Harbor and I’m there right now. In the rain.

We, as Americans, are lucky to have the freedoms we enjoy. We all know that freedom isn’t free but sometimes we either forget or take it for granted. Maybe that’s just one reason why there are monuments like this. They help us remember.

And they will help future generations learn.