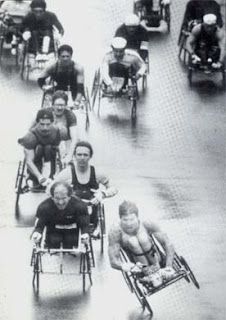 I was researching a story and came across this GREAT photo. For those who might not recognize the pavement, it’s the downhill start of the Boston Marathon as seen from the lead race vehicle in 1987. Stan Grossman took the photo for the Boston Globe.

As a bit of Boston Marathon wheelchair history and background, Bob Hall of Belmont, MA, was the first wheelchair racer to officially finish the race in 1975. He did it in 2:58 in a modified hospital issue chair! During the early 80’s wheelchair racers established themselves as an important part of the race and the numbers began to rise. Racing wheelchair technology was a bit slower to follow though and it’s safe to say that racers were limited by technology (as you can see from the shorter, four wheeled racers in the photo as compared to the longer, 3 wheeled aerodynamic chairs of today). Wheelchairs can reach 30 – 40 mph on the downhill start of Boston and in 1987, the racers set out aggressively on the wet, steep pavement. At the bottom of the first hill, nine racers fell after colliding or losing their balance. Some were able to right themselves, fix their chairs and finish and some were not. This photo shows the start off the accident.
Needless to say, race officials have now instituted a controlled start for the first mile…we can’t exceed 15 mph and have to stay in our starting grid positions.
By the way, I first arrived at the starting line (as an able bodied bandit) a couple years after this incident in 1989 and then again in 1990. My first wheelchair start came in 1994 and a few of these guys were still around! (Lots more on racing Boston later.)
For now, check out the image above…that’s competition! Fear nothing.
Be well.
Share this: